Continuing our short articles about fire prevention -last month we looked at the Fire Alarm system. This month we look at fire evacuation and fire escape methods and resources.

The principle of the fire evacuation safe escape route is that people can get away as quickly and safely as possible from the area where fire or smoke is present. For escape routes, requirements are set for material use and length. Escape routes should always be free of obstacles. 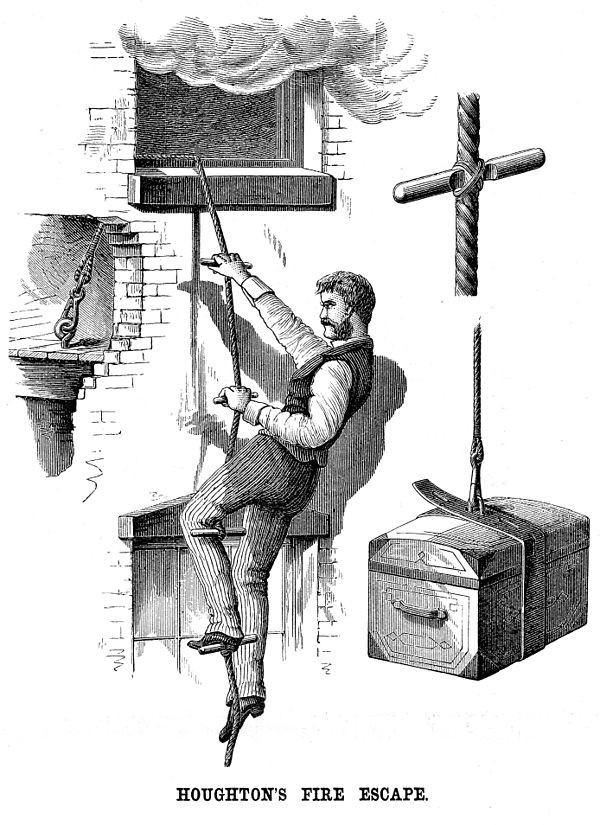 Did you know that one of the very first fire escapes was invented in the 18th century in England? David Maseres invented the machine in 1784 called the “Fire Escape”?

This machine was fastened to a window which allowed a person to descend to the ground.

According to SANS 10400: Part T – the Fire Protection Act says that; “In order to protect your property and the people in it, South Africa has implemented building regulations to ensure that the buildings are designed, constructed and equipped adequately in the event of a fire”. The Fire Protection Act states the following:

Ensure that you have an evacuation plan in place, ensure people understand it and ensure that fire drills are done regularly. Fire exit signs are a crucial in an emergency. Proper signage is critical for all fire exits and fire doors. Fire Regulations state fire exits are clearly marked and should show even when there are power outages. Never lock or block fire exits or doorways, halls or stairways and ensure everyone knows the sound of the alarm. Make sure that emergency numbers are displayed clearly and that all persons know where assembly point are.

Escape is generally considered in four distinct ‘Stages’ as follows:

Stage 1 – escape from the room or area of fire origin

Stage 4 – escape at ground level away from the building.

It is important that each floor plan of a building indicates the shortest route(s) to a place of comparative or ultimate safety should an emergency evacuation be triggered.

The width of final exit doors and the escape routes leading to them must be wide enough to accommodate the number of people using the escape route. Where possible, fire escape doors should open outward, or in the direction of escape.

Ideally, assembly points should be in the open air, where unrestricted dispersal away from the building can be achieved. Escape routes should never discharge finally into enclosed areas or yards, unless the dispersal area is large enough to permit all the occupants to proceed to a safe distance. A safe distance is considered to be at least the height of the building measured along the ground.

For further information about fire related safety issues, contact us by phone or https://firebrandsa.co.za/contact/